Urban Arts Corps (UAC) was founded in 1967 by Vinnette Carroll, who served as the company's premiere artistic director. It
emerged as a pilot project of The Ghetto Arts Program, a program
funded by the New York state Council on the Arts. Carroll
established the UAC in response to a request from John B. Hightower, the executive director of the council.

The initial members of the UAC were black and Puerto Rican students aged 17 through 22, from New York City public schools and youth agencies. The objectives set forth by those creating the UAC were to: share their professional training; provide youth
in ghetto areas with direct collaborative experiences with performing artists who shared their social and or cultural heritage; aid in the development of work techniques; introduce ghetto youth to materials, organizations, and artists that would enhance and improve their self image; stimulate and aid in the development of young artists in disadvantaged areas; and stimulate interest in professional and educational opportunities in the arts.

These objectives were identified as being critical for addressing the cultural needs of the Harlem and Bedford Stuyvesant communities of New York City as assessed in an earlier study conducted by Carroll.

One of UAC's long term goals was to provide accessible art in black, Puerto Rican and culturally under-served urban communities that demonstrated or gave life to the slogan "Black is beautiful." According to Carroll this art needed to be available in the streets, in parks, in playgrounds, parking lots, prisons, churches, libraries as well as in theaters and art galleries. She clarified the vision and ambition of UAC in the following statement "It cannot be gainsaid that the fight for meaningful employment, decent housing and freedom from hunger must preempt the fight for "Arts" in our list of priorities. It is, however, vitally important to utilize art and the artist as valuable tools in the struggle, as lubricants in communicating the struggle and as forces for creating a more sane, more cultivated, more peaceful life style."

Another goal of the Corps was to develop a major repertory company that produced new plays by black playwrights and relevant plays by major playwrights that were within the mission of the company. Classical plays of enduring value, as well as plays which could be used to develop the talents of the members of the Corps and enrich the lives of the black community were also sought out to be included in the repertoire.

In the 1975-1976 season, UAC introduced Your Arms are too Short to Box with God which it performed at the 1975 Spoleto Festival, held
in Spoleto Village in Italy. UAC's other production during this
season was Theo. The 1978-1979 season was filled with the
introduction of new works like Alice and When Hell Freezes Over
I'll Skate.

Cope and Arms have proven to be UAC's most popular plays. They
continue to be performed 20 plus years since they were first
introduced to the New York stage. Don't Bother me, I Can't Cope, was most recently performed in 1997 by the Crossroads Theater
company of New Brunswick, New Jersey. Your Arms are to Short to
Box with God, counts among its performers Patti Labelle and Teddy
Pendagrass. 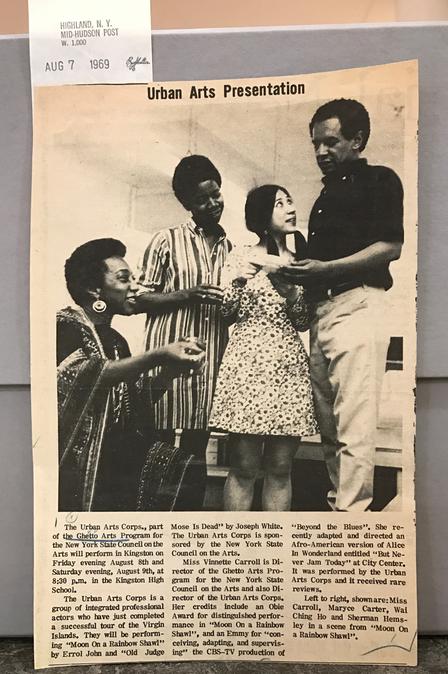